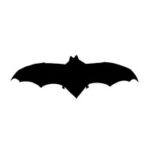 The nights are getting colder now and there are fewer moths around to eat. I'll be looking for somewhere to hibernate soon.