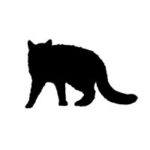 Snowing a lot, and it's very cold, so I'm staying in my den today...